Big League Clew is back again, with his Big 10 Conference preview! In the interest of time (the season starts this weekend), Here are Clew’s top contenders for the Big 10 title in 2011.

The Badgers have become more dynamic in 2011, as they now have a legitimate threat at QB with NC State transfer Russell Wilson (pictured above). However, this still is Wisconsin football so the ground game will be the staple of the offense. Wilson under center gives Wisconsin a productive passer with a lot of mobility. He ranks fourth among current quarterbacks in career passing yards (8,545) and third in TD passes (76). The Badgers haven’t had a quarterback with this ability in god knows how long. They typically use pedestrian signal-callers who excel more as “managers” of the game rather than play makers. This makes the Badgers a dual threat on offense. Wisconsin is coming off back to back double digit victory seasons, and last year they won their first Big Ten title since 1999. Wilson’s arrival ends any doubt about quarterback, but there are other issues that persist, particularly the lack of play makers on defense. They do have a nice mix of young players and veteran leaders to make this another strong Wisconsin team, and one that in my opinion should contend for not only the Big Ten crown but a spot in the BCS National championship. 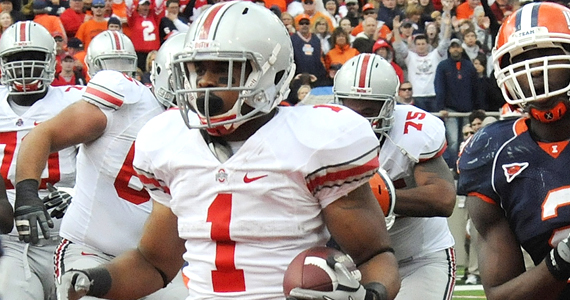 This past off season was very tumultuous for OSU. They had to vacate their twelve win 2010 season,  their share of the Big Ten title and their Sugar Bowl win. Then, coach Jim Tressel resigned, QB Terrell Pryor withdrew and three of their star offensive players were suspended surrounding the big NCAA violations controversy. That being said, Buckeye fans should get ready for an interesting season to say the least! Question number 1, who will replace Pryor? It could be Joe Bauserman, Kenny Guiton, Taylor Graham or highly regarded true freshman Braxton Miller. Miller arrives with a ton of talent and has the fans excited through what he has shown in the spring workouts, but will the staff look to the true freshman as the new savior of the Buckeyes offense? The buckeyes should be fine at running back even with star RB Dan Herron suspended for the first five games. Jordan Hall will step in as his replacement, he is a speed runner but the question everyone is asking is if he can handle the workload of being an every down back.

The defense should be steady enough to allow OSU to have a salvage their season. The thing to keep an eye on is how their secondary will hold up, as this group will have to handle most of the workload. Still, there’s more than enough talent on the roster, so this should be the least of Buckeye fans’ worries. Ohio State was picked as the favorite to win the Big Ten crown for the 7th year in a row before the NCAA scandal. Now, they will have to figure out how to patch some holes, most notably at quarterback and wide receiver, not to mention stay out of any further NCAA inquiries.

My Prediction: Your guess is as good as mine in regards to how they will finish up in the conference, but they still should get at least 7 wins because of their defense.

Nebraska is poised to make its Big Ten debut, but issues loom on both sides of the ball. The revamped coaching staff must develop chemistry, and look for leadership from their QB Taylor Martinez who had a brilliant early season as a redshirt freshman in 2010. Martinez (1,631 yards passing, 10 TDs, 7 INTs,965 yards rushing & 12 rushing TDs) became an impact player for Nebraska until an ankle injury against Missouri derailed a stellar season in October. After the injury, Martinez ran for just 79 yards and would only throw one touchdown pass the rest of the season. If the Cornhuskers are looking to become a powerhouse in the Big 10, they need a healthy Martinez. Nebraska needs help at receiver, which could be the cue for true freshman Jamal Turner to come in and make an immediate impact. The former QB enrolled early and gives Nebraska more options in case they decide to throw in some trick plays on offense. On Defense, Nebraska boasts a championship-caliber defense that features a rugged front seven, and you can count on this group to remain an aggressive. They should continue to use complex blitz packages as part of the defense, which should help make up for their rebuilt secondary. Just to give an example of how great the Cornhuskers defense has been, only twelve of the Huskers’ opponents have scored more than 17 points on them since 2009. This team faces one of the most difficult schedules in the Big Ten. They play Wisconsin, Ohio State and Penn State, and September non-conference visits from Fresno State and Washington could be risky. The Huskers will need to learn to play smarter (they led the Big 12 in fumbles lost with 16 and committed the most penalties with 109), andMartinez must provide leadership if they are to have a successful first year in the Big Ten.

My Prediction: 9 wins and will win the Legends Division, but not the Big Ten.

One of the Big Ten’s biggest surprises last season was Michigan State coming out of nowhere to force a 3 way tie atop the standings. Even though it was shared, it was the first Big Ten title for the Spartans since 1990. I along with many people felt that MSU was snubbed from a spot in the BCS games because they had a better overall record than both Wisconsin and Ohio State (they lost the tie-breaker). The Spartans are still looking for their first BCS appearance, and the potential is there this season. There is a lot to like about the 2011 Spartans, especially since QB Kirk Cousins enters his third season as the starter and is already ranked 1st in school history in passing efficiency and completion percentage. The Spartans also boast a loaded RB core. Edwin Baker, Le’Veon Bell and Larry Caper are all returning this year and the three combined for 1,950 yards and 23 touchdowns in 2010. Baker led the team in carries (207), rushing yards (1,201) and rushing TDs (13), while Bell played surprisingly well as a freshman and Todd Anderson (fifth-year senior fullback) was used to plow through his opponents in short down situations. On defense, the secondary was the main reason for all of the success that MSU had in 2010, as they went from 112th in the nation in pass defense to 60th with 17 picks. If they can figure out the offensive line and find some play makers on defense, Michigan State looks like a serious contender to win the Legends Division. Contrary to the 2010 season, the Spartans will have a much more difficult schedule ahead of them this year. They have to face major opponents on the road, playing at Notre Dame, Ohio State, Nebraska and Iowa.

My Prediction: 8 Wins for the Spartans, probably no Big Ten title but a solid season and a trip to another bowl game.

Last year, coach Ron Zook brought in offensive coordinator Paul Petrino from Arkansas & Defensive Coordinator Vic Koenning from Kansas State. The results were very surprising, as the previously struggling offense surged to top of the Big Ten. Meanwhile, the defense started off strong but crumbled by the end of the season. Petrino’s new style offense set single-season records for points (423) and points per game (32.5). This season, they look to fill a void at RB and improve on the passing game (they ranked 10th in the Big Ten and 111th in the nation (151.0 ypg). They will have a solid QB in Nathan Scheelhaase (1,825 yards, 17 TDs & 8 INTs), who as a redshirt freshman in 2010. He also ran a school single-season record for a quarterback with 868 rushing yards (5 TDs). For all his good traits, Scheelhaase has to become a more efficient passer in order for this team to continue their success. The defense excelled at big plays, ranking second in the Big Ten in turnovers (27), tackles for loss (6.2) and sacks (1.8). But as mentioned before, they crumbled late in the season as the Illini allowed an average of 33.7 points in the last four games after only allowing 16.7 in the first 8 games. Illinois has momentum, and it’s vital for Zook to keep the ball rolling. There are some good building blocks both on offense and defense. The offense is led by a strong line and Scheelhaase, but the unit must pass better and find a running back. The defense has bigger issues, as they will need to replace four of the front seven. No Big Ten school suffered more early departures to the NFL than Illinois did last season. The staff should be up for the challenge, as Illinois has enough to play in back-to-back bowls for the first time since a five-year run back in the late 80s/early 90s.