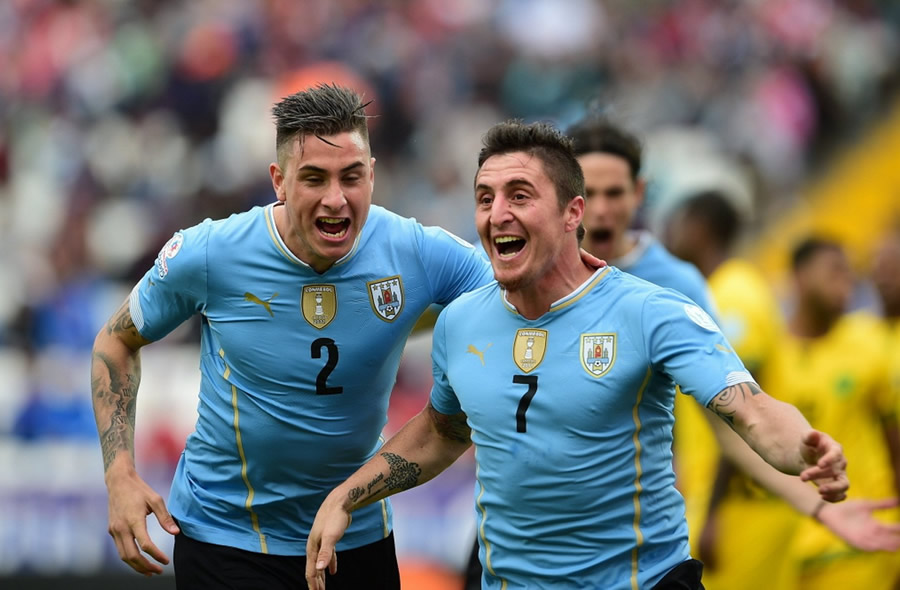 Coming into this game, one couldn’t have blamed Uruguay if they had taken their Jamaican opponents lightly. I don’t think they necessarily did, but Jamaica definitely seemed to surprise La Celeste with their level of skill, and the fury with which they attacked. At the end of the day, the Charrúas were able to fight their way to a 1-0 group stage opening win. Let’s get the particulars.

As is often the case with Uruguay in these tournaments, they got off to a slow start in this game. In fact, both teams did. After the first 45 were spent pretty much feeling each other out, and Jamaica’s Darren Mattocks whiffed on what could have been an easy goal in the 39th, the two teams went to the break tied at 0-0.

It took just seven minutes after the restart for the Uruguayans to finally get on the board. In the 52nd minute, Nicolás Lodeiro, who plays his club ball for the legendary Argentine side Boca Juniors, got a free kick at the top of the pitch and booted it perfectly back across the goal. Defender José María Giménez of Atlético Madrid was there to head it to the middle, just outside the goal box, where Cristian “La Cebolla (The Onion)” Rodríguez booted it past the diving Duwayne Kerr for the score. It wasn’t that pretty, but it went in, and the good guys were on top.

Uruguay spent the rest of the game trying to keep Jamaica out of the goal. The Reggae Boyz had some opportunities throughout the second half, but Giles Barnes was unable to put the ball in the net on two occasions. Uruguay missed a chance to put the game away late, when Christian Stuani found himself in front of the net all alone with Kerr out of the play, but the Espanyol forward hammered the ball too hard into the ground, and it bounced harmlessly over the net. No matter, Uruguay held on for the win.

Look. I would like to have had Uruguay come out and put up a three spot on the Jamaicans, end the game early and run away with it, but a win is a win, and three points is three points. We’ll take it. It’s more than Argentina was able to do against Paraguay.

Next up for LaCeleste is a matchup against that very same Argentina squad, this Tuesday at 7:30PM. Hide your wives. Hide your kids. I’m expecting a lot of cards in this one.