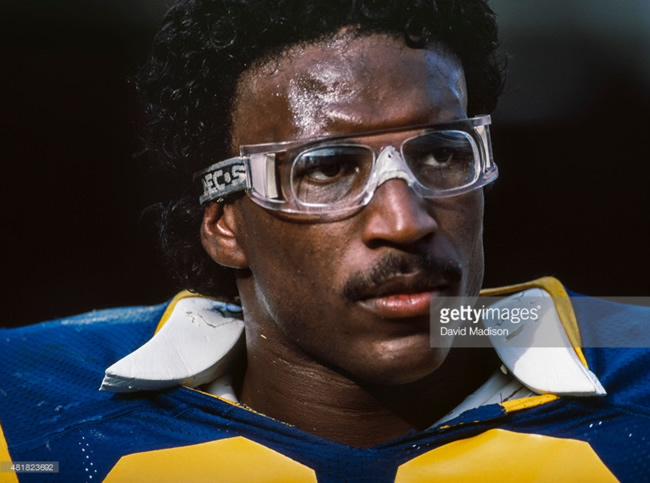 From the second Eric Dickerson stepped onto the Anaheim Stadium field in 1983, it was obvious that he was a megastar in the making, and destined to be one of the greatest Rams of all time. Unfortunately, things fell apart less than five years later, and the Rams were forced to trade him in the middle of his prime. Here’s how it all came together and then fell apart.

Coming out of high school, Dickerson was one of the most sought-after running backs in the country. He committed to Texas A&M originally, and was suddenly driving a brand new Pontiac Trans-Am. He eventually backed out on A&M and chose Southern Methodist University (SMU), but he held onto that Trans-Am, you bet’cha. I mean… if he gave it back, wouldn’t he look guilty of taking money? Who cares? Those guys need to get paid anyway. Also, SMU was given the “death penalty” in 1987, so… yeah. Hey, at least they didn’t give him a fucking Trans-Am to parade around town in. They would have gotten the death penalty a lot sooner.

Anywho, Dickerson was a hero at SMU. He ended up setting conference records for carries (790) and yards (4,450), and he tied the school record for TDs (48). He even finished third in the Heisman in 1983 despite splitting carries with Craig James, as part of SMU’s famous Pony Express running game. It was no surprise at all when the Rams made Dickerson the 2nd overall pick in the draft that April (John Elway went #1).

The the delight of everyone in the organization, Dickerson exploded onto the NFL scene his rookie season. In 16 games and starts, he ran 390 times for 1,808 yards and 18 TDs. All three were rookie records. He also made the Pro-Bowl and won the Rookie of the Year. Welcome to the NFL, big guy. Guess what, though… he was even better in his second year. In 1984, he carried “just” 379 times, but put up 2,105 yards and led the league with 14 TDs. The imposing yardage total represented the first 2,000 yard season since O.J. Simpson did it back in 1973 (in just 14 games for “The Juice,” though). It’s also still the top rushing yards output in the history of the NFL. Not bad for a 24-year-old guy in his second year in the league, right?

Unfortunately for the Rams, the honeymoon would soon end. Starting in 1985, Dickerson began what would be years worth of contract disputes with the team. He missed two games that season while sitting out for 47 days. When he returned, it was under the promise that the Rams would cover a $4 Million disability insurance policy for 1985, and the two sides would continue to negotiate towards an extension worth millions at the end of the season. He eventually signed the deal and had another killer season in 1986, racking up 1,821 yards and 11 TDs on 404 carries.

1987 would mark the end of Dickerson’s career as Ram. More bickering over contracts, as well as the NFL Players strike that year (we covered it in our previous post about Suge Knight), got the season off to a rough start for the running back. According to an L.A. Times article from 1987, it seems Dickerson was unhappy with the extension he had signed the year before, and he and his agent, Charles Chin, had begun asking for renegotiations over the offseason. After a few fruitless meetings, Dickerson decided to take his frustrations to the press. He lashed out at management and Rams coach John Robinson, who Dickerson alleged made more money than he did. Said the disgruntled Dickerson:

Not long after that, Rams management decided they’d had enough of their surly running back, and a blockbuster of a deal was struck. In a trade not commonly seen back then, or even today, the Rams found not just one trading partner, but two; they struck a three-way deal with the Bills and the Colts. As he wanted, Dickerson went to the Colts, where he signed a four-year, $5.6 M contract to make him the highest paid running back ever (at the time). Cornelius Bennett was sent from the Colts to the Bills, while running back Greg Bell went from the Bills to the Rams. The Rams received another running back in the deal, snatching Owen Gill from Indianapolis. The real haul, I think, was all of the picks the Rams got in the deal. They received the Bills’ first round pick in 1988 and their first two picks in 1989. They also got the Colts’ first and second round picks in 1988 and their second pick in 1989.

Wowsers, am I right? Anyway, Dickerson would dress for the Colts’ very next game, and ended up rushing 223 times for 1,011 yards and 5 TDs in just 9 games with Indianapolis. I guess he was pretty happy with his new team, and all of that nice new money! The next season, he led the league in rushes (388) and yards (1,659), and scored 14 TDs to boot. He rushed for another 1,311 yards in 1989, but he was never really in the upper echelon of NFL running backs again. Injuries and more contract disputes led the Colts to place him on the inactive list for seven weeks in 1990. He was suspended again in 1991, and the Colts cut ties with him prior to the 1992 season. He was traded again, this time to the Raiders, where he rushed for 729 yards in 15 games. The Raiders traded him to the Falcons the next year, but a backup role didn’t suit him. He was traded to the Packers, but failed a physical and retired.

From a morale standpoint, I can imagine that this was pretty rough for Rams fans to take. With Dickerson, Jim Everett and young receiver Henry Ellard, the Rams’ offense was starting to look pretty menacing. Things weren’t all bad after the deal, however. Charles White stepped in nicely for Dickerson that season, running 324 times for 1,374 yards and 11 TDs. In 1988, Greg Bell rushed 288 times for 1,212 yards and led the league in rushing TDs with 16. His 15 TDs the next year led the league as well. With the draft picks, the Rams added RB Gaston Green, WR Aaron Cox, LB Fred Strickland, RB Cleveland Gary, LB Frank Stams and DB Darryl Henley. The team didn’t have much success after Dickerson, but a couple of those names aren’t half bad, right? Hell, the Bills did probably the best of all, as Bennett ended up being a hell of a player for them in their run of Super Bowl appearances.

Anyway, nobody can really ever say what would have happened to the Rams if they’d just given Dickerson his money and held onto him for the last couple of seasons of his top-notch talent. Maybe they would have had a decent run, considering Ellard matured into one of the best receivers in the game, and they added Flipper Anderson to the attack not too long after this deal went down. The Colts never won anything with Dickerson carrying the load either. All I know is that this was a huge deal back then, and it still remains one to this day.