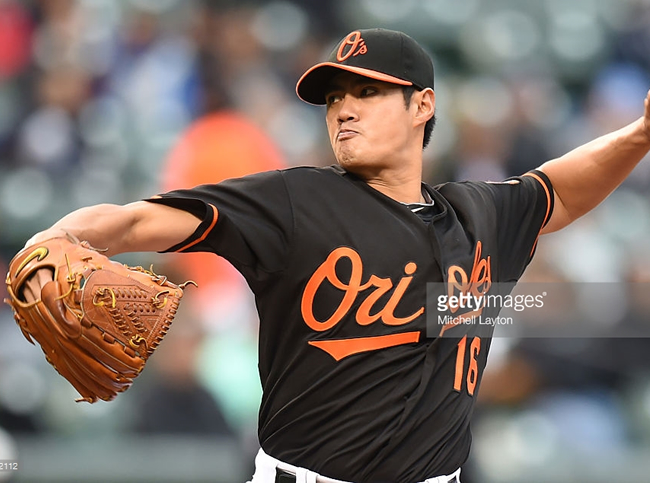 The Yankees, along with just about every team ever, need more starting pitching. According to the rumor mill, they might be interested in Wei-Yin Chen. Chen checks off a lot of the boxes and certainly fits the bill of a guy that should be looked into, but should they sign him?

Chen, a 30-year old lefty from Kaohsiung City, Taiwan, actually started his professional career in Japan in 2005 as a 19-year old. Tommy John surgery derailed him a bit in 2006, but by 2008, he was in the Chunichi Dragons’ rotation full time. He built a reputation as an extreme control pitcher, only walking 2.2 men per nine innings over his five seasons in the NPBL. He was able to opt out of his contract after 2011 with a goal to head to the major leagues, and was signed to a four-year deal by the Orioles. Over the last four seasons, he’s been a reliable and solid member of the staff, even becoming the second winningest pitcher from Taiwan in major league history (miss you Chien-Ming Wang). Now his first MLB deal is up and he’s free to sign wherever he wants.

If you’re unfamiliar with his pitching style, it’s still all about control. According to Brooks Baseball, Chen features a four-seam fastball that averages 93 mph, a slider (84 mph), sinker (92 mph), splitter (84 mph) and a curve (74 mph). His fastball is slightly above average, his slider is good, although not spectacular, and his sinker, splitter and curve generate fewer swings and misses than the average major leaguer. He throws the heater basically half the time, the slider a little under 20% of the time, and the sinker and splitter somewhere around 10% of the time each. The curve is more of an afterthought than the other pitches. Whatever he’s throwing, its all about location for Chen. He’s been very consistent with his accuracy, but if that ever goes, look out.

There’s a lot that Chen does well. As we mentioned, he does not give away a lot of free passes. He also doesn’t give up very many hits, as his career hits per nine average is just 9.1. He’s also very durable, having made at least 31 starts in three of his four big league seasons, with the lone exception being 2013, when he missed some time with an oblique injury and had some bone spurs removed from his knee in the offseason. Neither of those injuries are particularly scary at this point. He hasn’t had any more trouble with his elbow since TJ in 2006, and he’s never had any sort of shoulder problems. There’s no reason to think he’s a risk to break down, other than the normal risk anyone pitching takes every time they go out there. Chen has also cut his teeth in the AL East already, so I don’t think he’ll be phased by pitching in Yankee stadium, or against any of the divisional opponents he will see several times a year.

It’s not all good for Chen, however. Because he relies so much on control, and doesn’t throw that hard, his mistakes tend to get hit. He is a bit of a fly ball pitcher, only getting grounders 40.5% of the time, and his home run rate (1.32 HR/9) is also below average. I would say that this would scare me for a guy playing at Yankee Stadium, but he’s pitched at Camden Yards four four years, which is a very hitter-friendly park. I’m pretty sure my 10-year old nephew could hit one out of there at this point, and he plays soccer. It’s the definition of a bandbox. Moving to Yankee Stadium might actually help him out because he’s a lefty, and the short porch is in right field, but his home run average will probably remain the same, which is manageable. Chen will also be getting a qualifying offer from the O’s, which means the Yankees would have to give up a draft pick to get him, which we all know they hate doing.

At the end of the day, Chen is not a game-changing type of guy. He would definitely solidify the middle of the rotation, but I think I’d much rather the Yankees sign a top guy (on offense or on the mound) if they’re letting go of one of their precious first round pick. Now, if they sign a top guy and give up their first rounder for him, I could justify bringing in Chen at the expense of a second round pick. Either way, I think Chen will sign late, long after the top guys sign and the market for pitchers develops. I wouldn’t be shocked if he’s in the Bronx next year, but I also wouldn’t be surprised if he’s somewhere else.